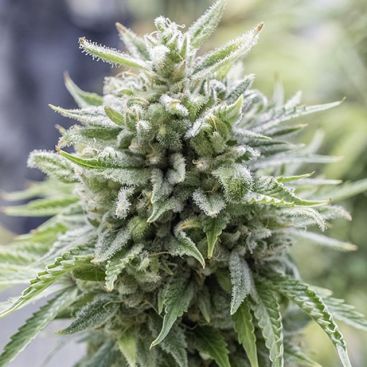 Famous californian variety  OG Kush is finally presented as the autoflowering feminised hybrid! It's the same strong "Super-potent" cannabis with a peculiar smell, which now can be easily grown in any season of the year.

The original Og Kush appeared in the early 90s of the last century, but the story of its origin is covered with secret. It is considered that the key influence on the genetics of the product had such varieties as: Lemon Thai, Chemdawg and Pakistan Kush. After crossing with Ruderials Og Kush has the ability for Aoutoflowering. The resulting hybrid not only retained all the key properties of its progenitors, but also began to grow much faster and more efficiently.

Auto Og Kush feminized refers to high-performance varieties. Ripening only 60-70 days, growing plant indoors from one bush you can effortlessly get 150-200 grams of first-class dried cannabis. Growing outdoors will give about 400 grams per square meter. Plants have a charming appearance and can reach 2 meters in height. The hybrid negatively reacts to sudden temperature changes, but it is absolutely fit to the other climate conditions.

Feminized auto-flowering Og Kush has a distinct odor, so the ventilation when grown indoore is recommended. In its smell you can feel hot pepper, lemon, pine and diesel fuel. High THC content (up to 24%) guarantees an effect that literally knocks down. The body relaxes, imagination reveals the full potential, dozens of thoughts visit the head at the same time. Trying out Auto Og Kush feminized once, you'll have a desire to come back again and again.

We are locally present in:

8 other products in the same category:

To be determined Shipping
€ 0.00 Total